Who doesn’t love a good release day party? I have teamed up with my friends at Enchanted Book Promotions to celebrate the release of Nothing Is Lost in Loving by Brenda Moguez today. This is her second novel that she is publishing on Amazon. To celebrate, readers have the opportunity to win one of THREE $25 Amazon gift cards! We all want more of those, right? Please read on to find out more about the book and then you can enter the giveaway at the end. Thanks for stopping by and good luck! 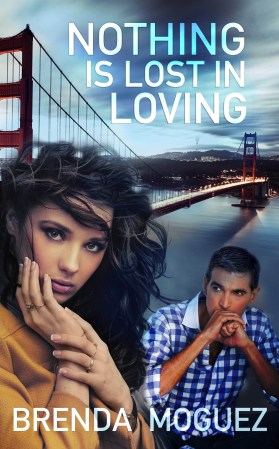 Title: Nothing is Lost in Loving
Author: Brenda Moguez

Genre: Women’s Fiction
When Stella Delray unexpectedly loses her job a week before Christmas, which is also the anniversary of her husband’s death, she is forced to stop talking to his ashes, come to terms with her loss, and get her life back on track for her young son’s sake as well as her own. She never expected that posting an ad on Craigslist would send her into the arms of not one but two men, one of whom is her former boss. Now she’s working as an admin for a retired Broadway star, bookkeeping for an erotic video production company, and writing love letters for the mysterious “Oaklander.” Adding to the craziness of her new life, her monster-in-law resurfaces and the father-in-law she never met shows up on her doorstep. With the guidance of her best friend, Bono, Stella will learn to redefine the rules she’s always lived by.
Buy it on Amazon

Brenda Moguez writes the kind of stories she loves to read–women’s fiction, starring quirky, passionate women who are challenged by the fickleness and complexities of life.
She’s particularly drawn to exploring the effects of love on the heart of a woman. She has aspirations for a fully staffed villa in Barcelona and funding aplenty for a room of her own. When she’s not working on a story, she writes love letters to the universe, dead poets, and Mae West. Her second novel, Nothing is Lost in Loving, is set to release April 2016. You can find her at http://www.brendamoguez.com where she explores passionate pursuits in all its forms.

Win 3 $25 Amazon gift cards during the release.
a Rafflecopter giveaway